The store will not work correctly in the case when cookies are disabled.

"We think we have to change the world on such a big level, but you just need to start." — Kristy-Anne Swart, Cosette's mom

There is a new kid on the "small but mighty" block.

Stroke by stroke, abstract painter and four-year-old Cosette Swart is doing her part to alleviate poverty for people around the globe. Cosette was three years old when she discovered that there were places where people lacked food and water. Distressed, Cosette asked her mom and dad how she could help. Her mom, Kristy-Anne Swart, a photographer and self-taught painter, found her old acrylic paint and suggested Cosette sell paintings in order to raise money. Their goal: sell enough to buy a cow for a family in need through World Vision. Several cows, alpacas, goats, pigs, sheep and roosters later, the tiny philanthropist had raised $1,900 in just four months. By February 2015, she'd sold more than 75 paintings and raised more than $4,000. And she's just getting started.

The young artist, based out of her kitchen-turned-studio, has continued her fundraising for charity: water. She'll start selling prints of her work, as well as originals, to keep up with demand. Cosette now paints three days a week and only when her toddler brother, Lewis, is napping. We sat down with Cosette and her mom Kristy-Anne during one of their (rare) quiet moments at home. 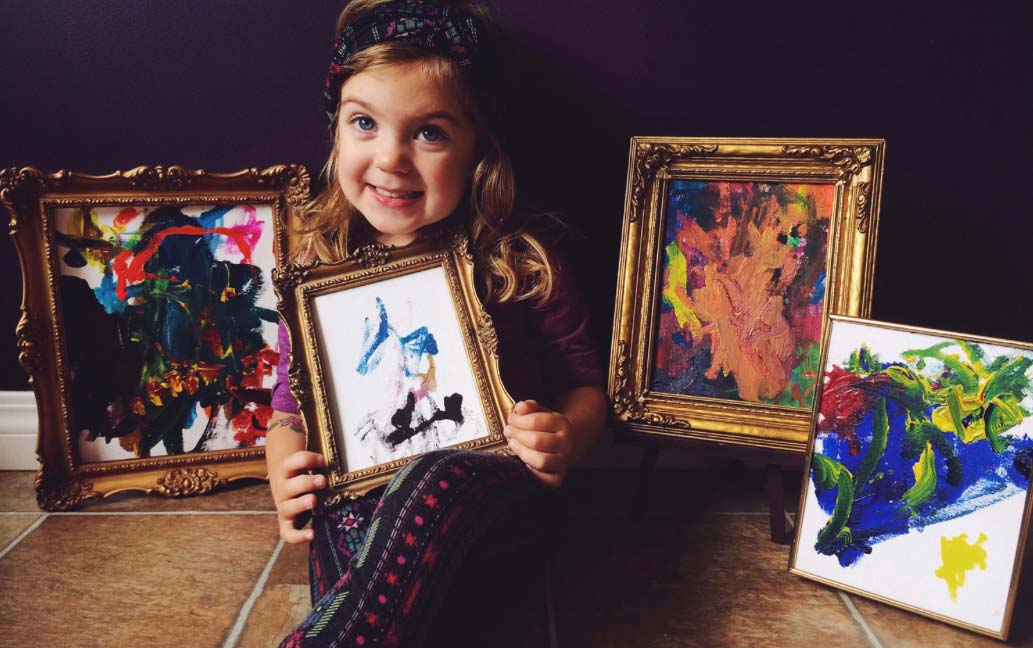 AU: So Cosette, spill the beans – what are your favorite colors to paint with?

Kristy-Anne: Cosette began going to preschool this year three mornings a week. The other day, they began painting in school with water-based paints. When we began teaching Cosette about painting, we talked with her about how to layer paints so they don't muddy with too many colors. When she paints, I'll say, ‘That color looks lonely. There should be some friendship over there.' That's how we talk about painting so she understands it. Now she can go back and recognize when it's gotten too muddy. 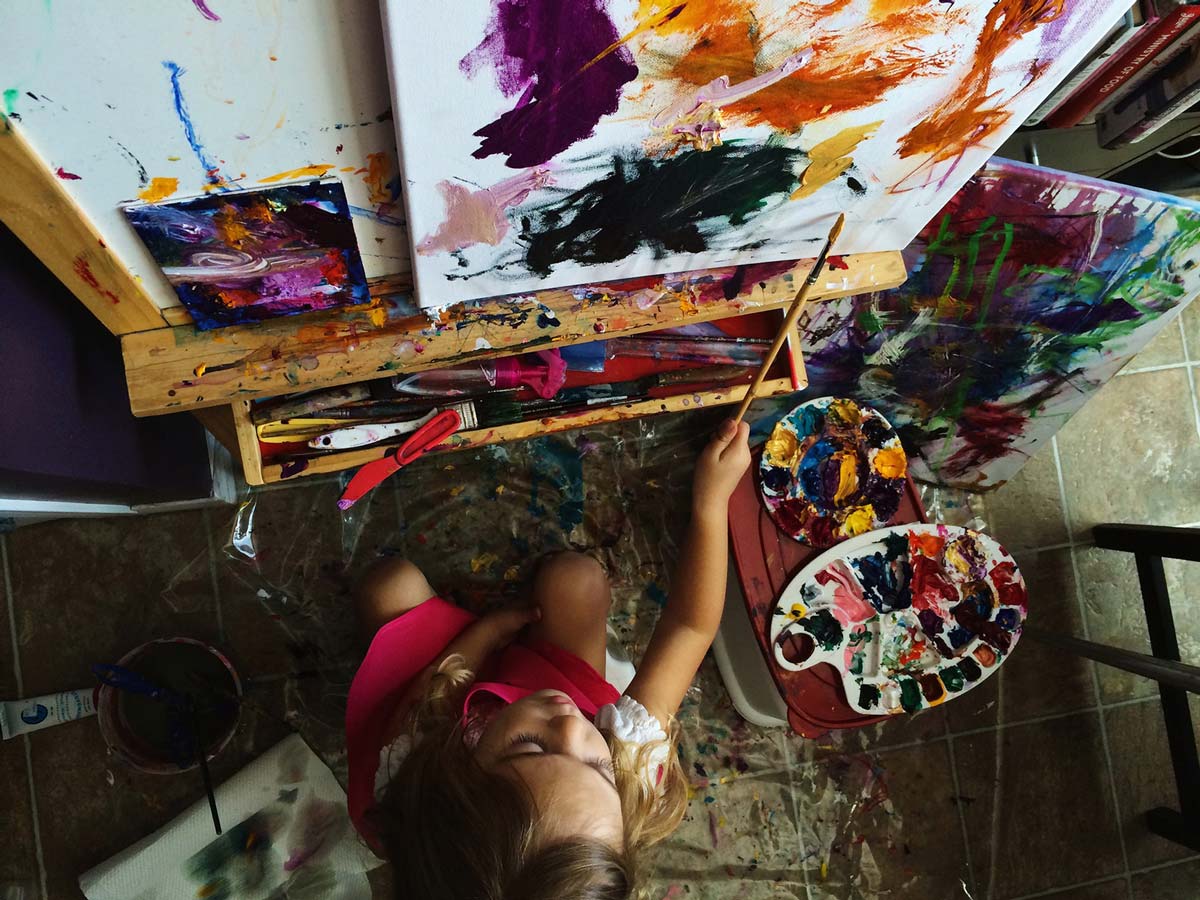 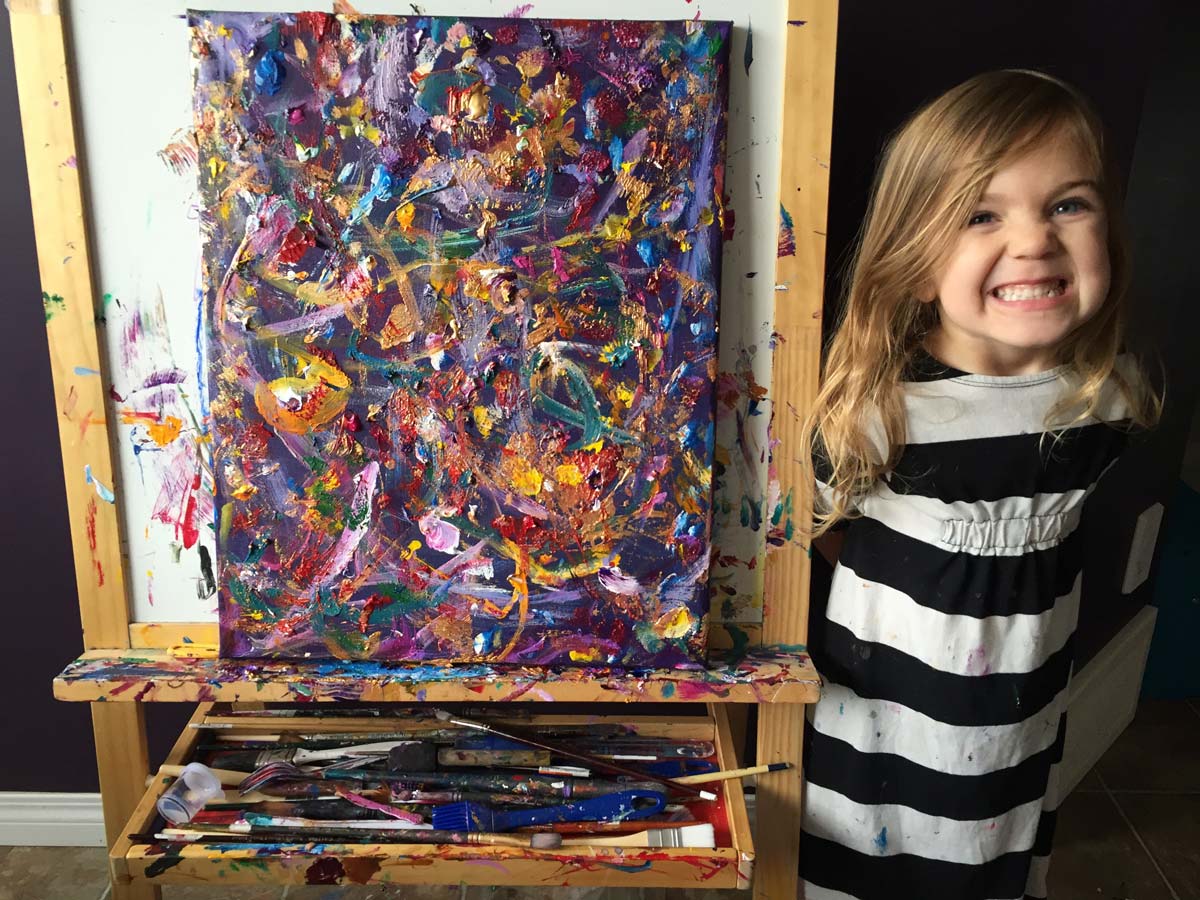 AU: What do you want to be when you grow up?

(Editor's note: Cosette informs us that this is top-secret information)

C: A lot of things – a thing for each of the days. A doctor on Mondays and a builder on Mondays too. I want to be a zookeeper on Tuesday. Wednesday a singer and Thursday a painter. A mommy on Friday and I might be builder on Saturday too.

KA: On the days she's a mom, she says she's marrying her brother and he's going to stay with the kids when she goes to work. 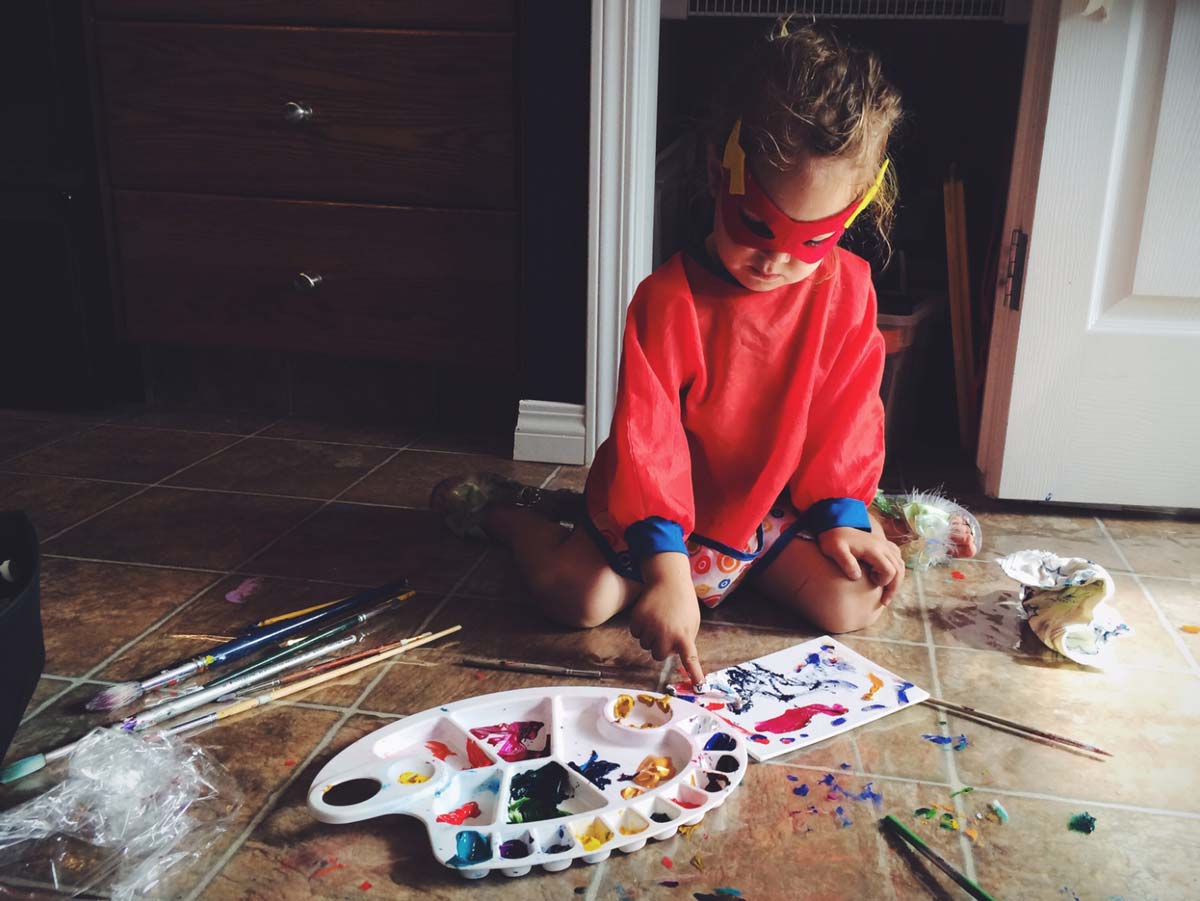 AU: What's your favorite music to listen to while you paint?

C: I have some of daddy's songs on my iPod. Lewis's favorite song is Buffalo Soldier by Bob Marley.

KA: And what's the name of your band on the day you're a singer? 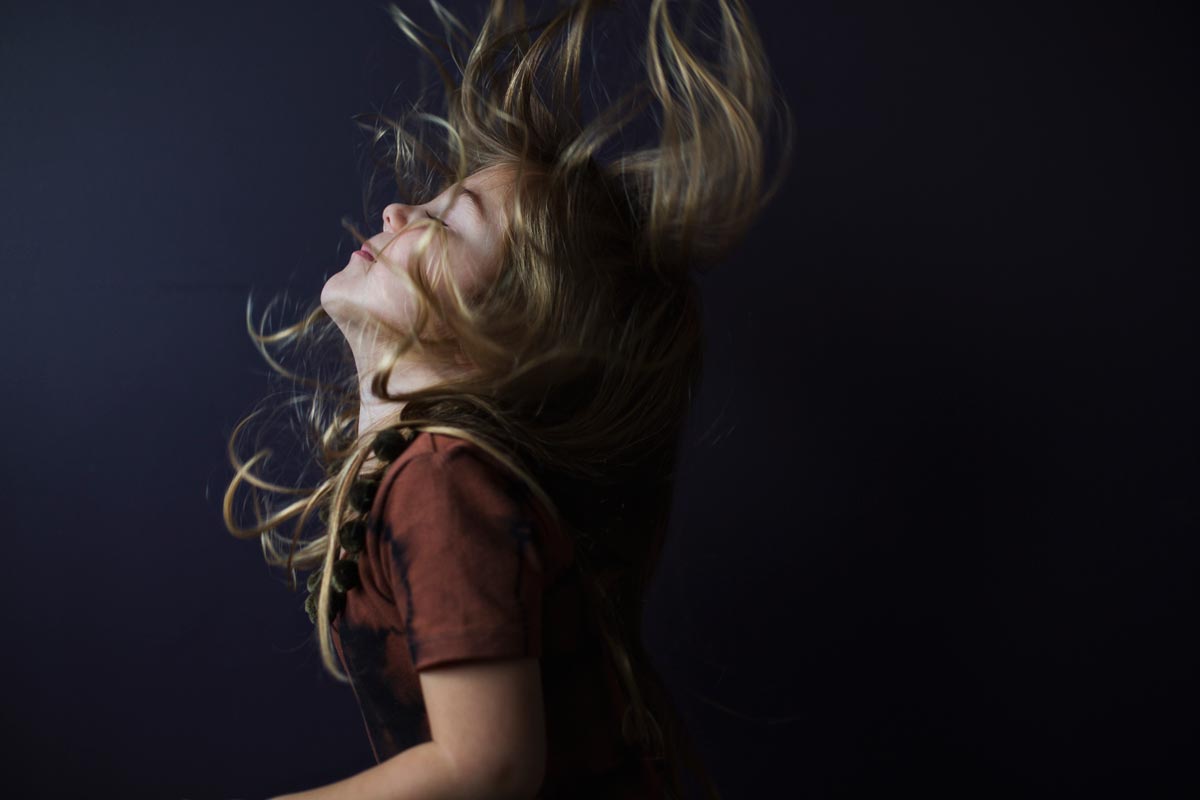 AU: We heard you're raising money for charity: water. And a little bird told me you love watching their videos. What's your favorite?

C: The Rachel video. I have a friend named Rachel.

KA: She watches the videos daily, but her favorite video is the one about a nine-year-old girl named Rachel who was raising money for Charity Water before she died in a car accident. Cosette asked me, ‘If I die, will you carry on my project, too?' 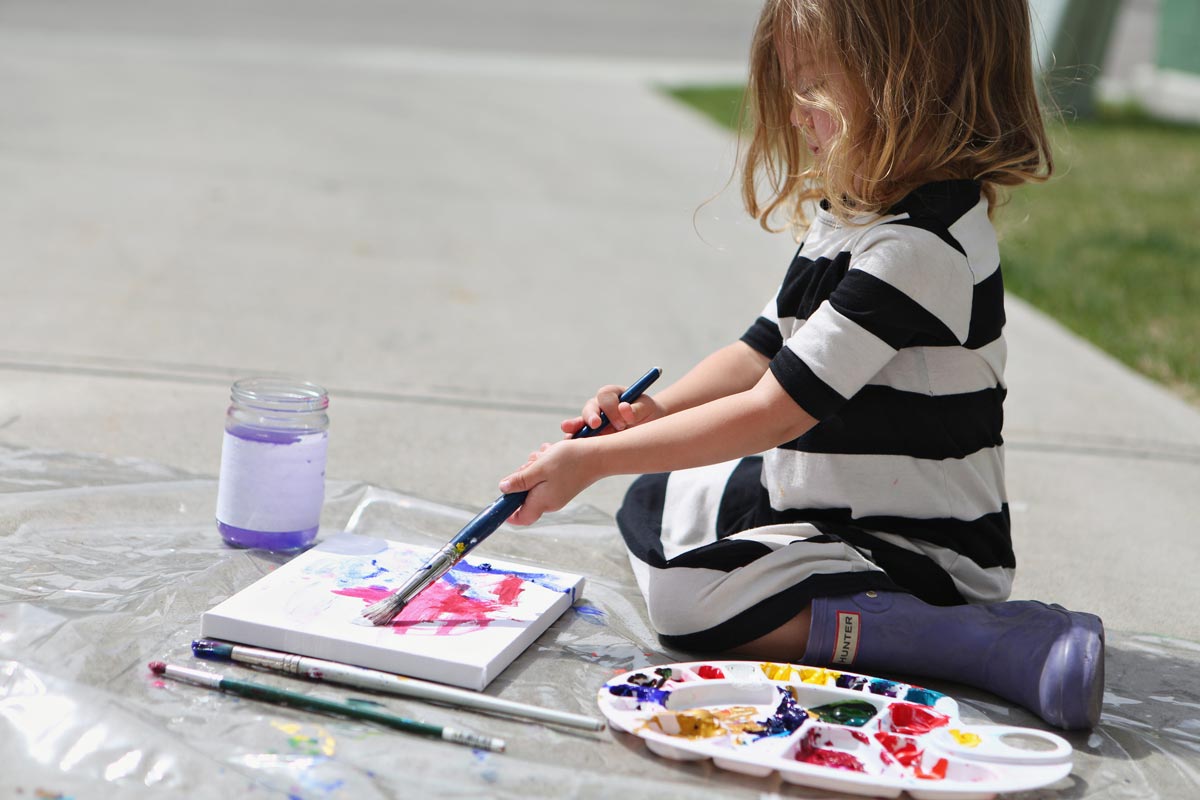 AU: How has Cosette's perspective shaped your own?

KA: Children are just so innocent – they listen and understand things in such an honest way. And I look at Cosette and I'm reminded that I need to listen to what's going on in the world – and remember that it's not ok and that I need to do what I can.

Sometimes I think we just build up these walls in our lives to shut out injustice because, if we remember it all, it's overwhelming. 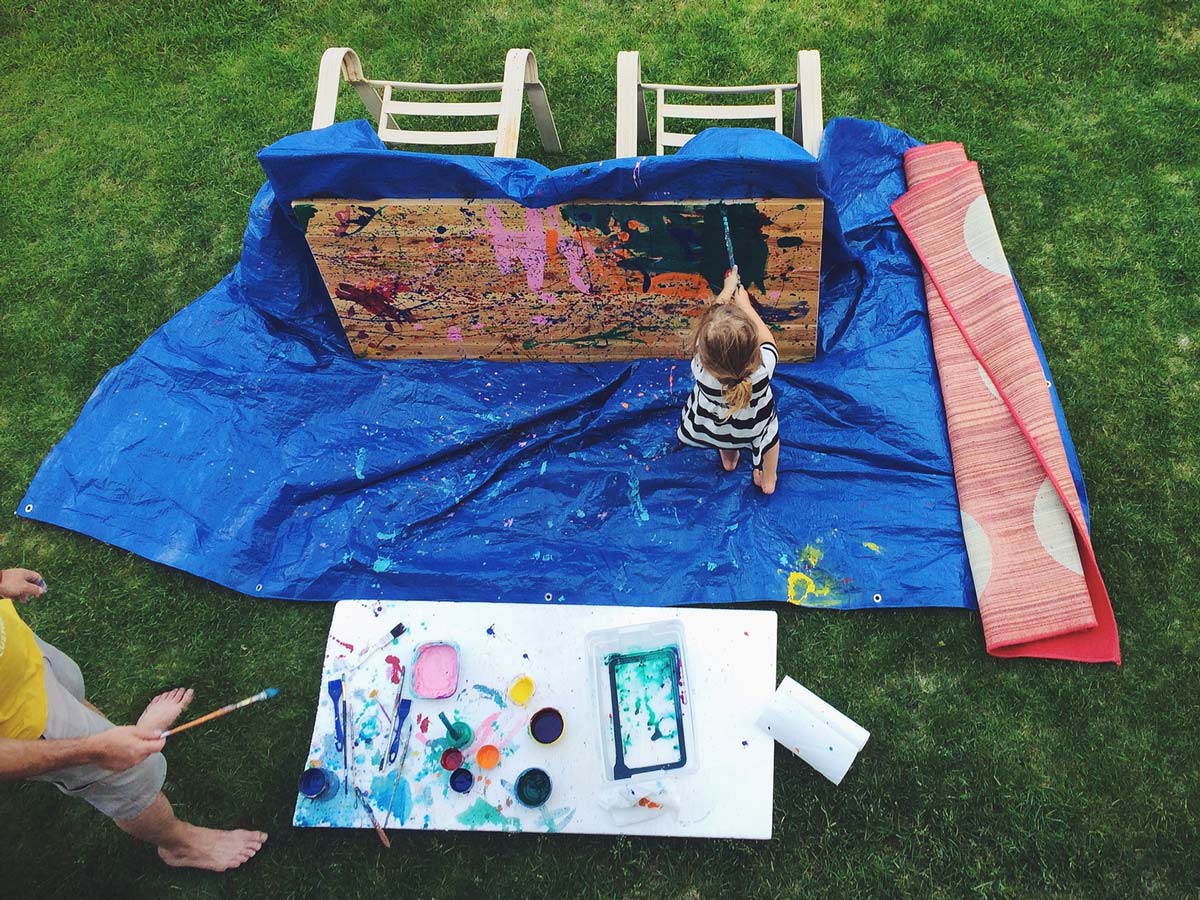 AU: What do you feel is the biggest lesson you've learned from your daughter?

KA: Oh man. Well, we've been reminded about what matters in life. And that anyone with an idea can do something. You know, we think we have to change the world on such a big level, but even feeding one family with one chicken or one cow – or bringing water to just one person for 20 years – that's changing the world. It doesn't always have to be so big. You just need to start.

AU: I love that. Just start.

KA: Exactly. Don't wait. It's about doing something before you have it all lined up – not waiting for all the pieces to come together first. And I see that in Cosette – she just wants to help. She's not trying to analyze if there's someone doing it better or worrying if people will like it. She's just creating – and trying to help. It's a desire that's going to be a part of her DNA forever. 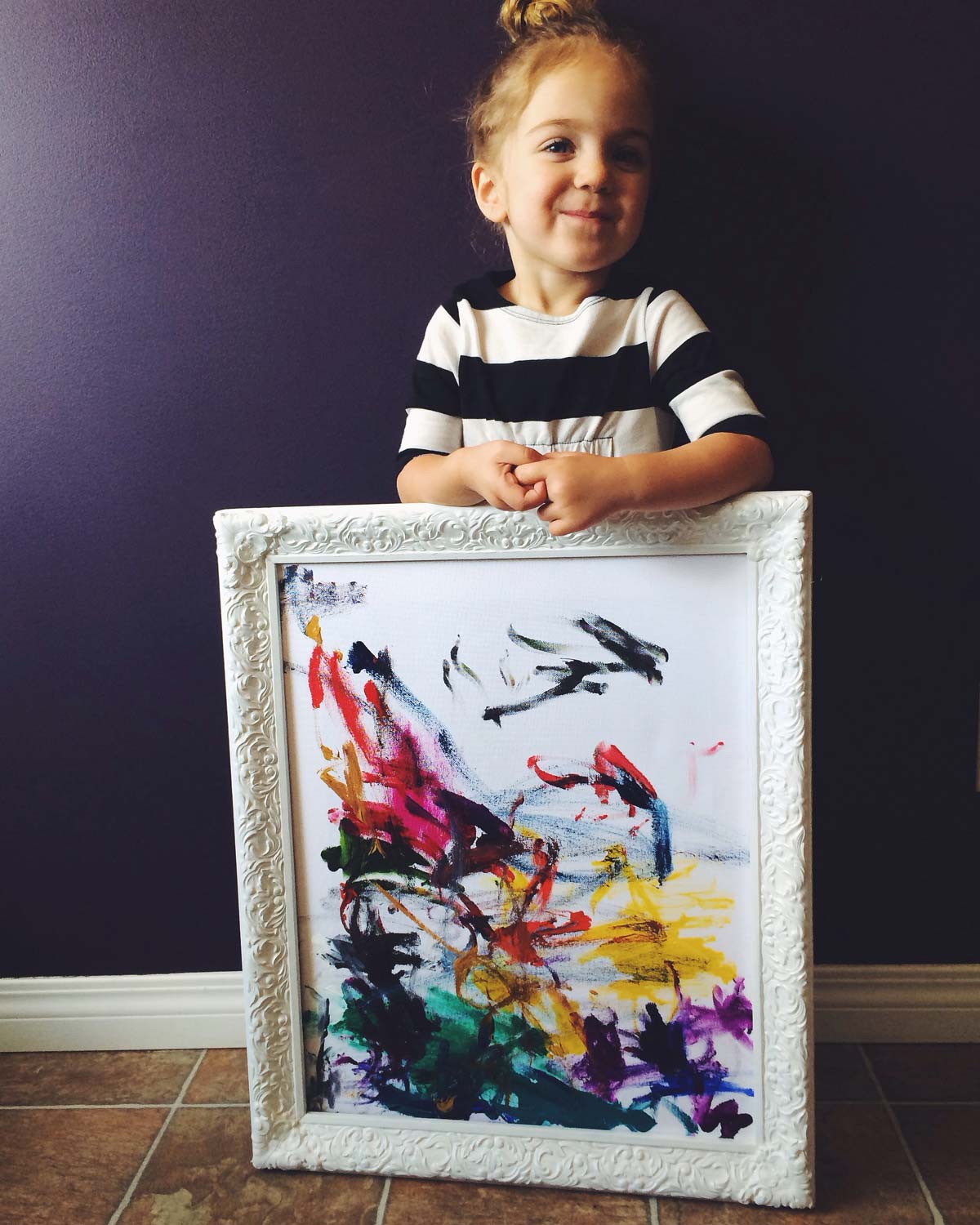 And so – little by little and painting by painting – there's a four year old changing the world. Cosette tells us that she dreams of going to Mali some day to meet the kids she sees in the charity: water videos, the ones she talks about every night before bed. Until that day, Cosette will keep on raising money, one painting at a time.

Want to support Cosette in her mission to bring clean drinking water to Mali? To learn more, purchase artwork on her website here or donate directly to her charity: water campaign by clicking here. 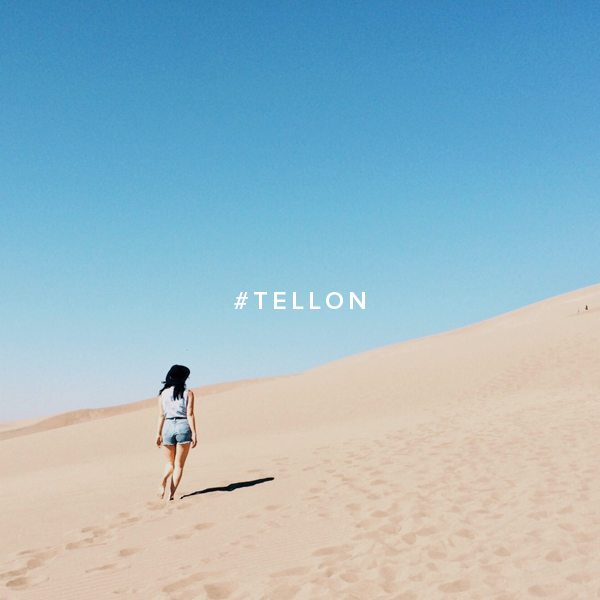 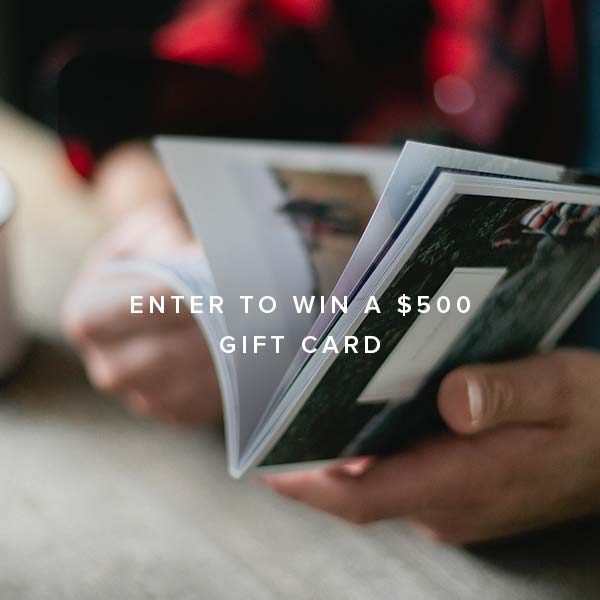 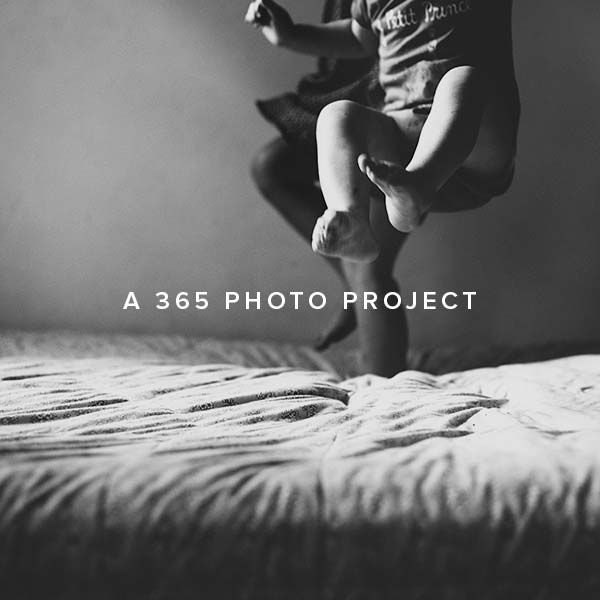